Ruta 40 on a motorbike

To travel on a motorcycle is an adventure in itself: explore new roads, new horizons, feel alive with the wind in your face. It is about traveling far and also inwards, getting to know yourself better.

One of the Best Motorcycle Journeys in the World

According to Outside Magazine Argentina's Ruta 40 is one of the "World's Best Four motorcycle journeys":

Below we will see how to prepare for your motorcycle trip. 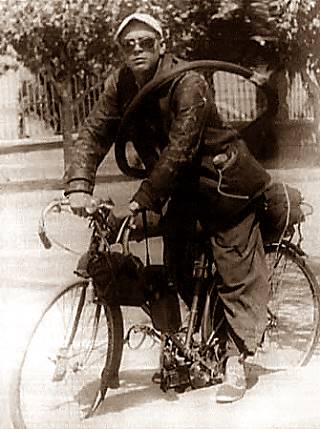 The exact itinerary is unknown, but we do know that Ernesto Guevara, better known as "Che" Guevara, visited the provinces of Santa Fé, Córdoba, San Luis, Santiago del Estero and several of the provinces through which Ruta 40 is aligned: Salta, Tucumán, Jujuy, Catamarca, La Rioja, San Juan and Mendoza.

We also know that he rode from Mendoza to San Juan along Ruta 40 but couldn't reach La Quiaca due to the summer rains which floded several rivers.

Ernesto Guevara is one of the charismatic Argentine figures of the late 1950s ad 1960s. He did a second and much longer journey which was portrayed in the movie "The Motorcycle Diaries", a trip which would take him across Latin America: through Chile, Peru, Colombia, Ecuador, Venezuela and Panama. He ended up in Miami, USA with his friend Alberto Granado in 1952.

This journey also found him on Ruta 40, in Bariloche (Spanish webpage) on his way into Chile.

The photograph shows him on his moped, which had a "Micrón" engine built by Meccanica Garelli de Milán, Italy. The photo was published on May 19, 1950 as an advertisement by Garelli.

You and your Motorcycle

You should be well acquainted with your motorcyle, know how it handles on the highway, which speeds are the ones that make you feel comfy.

How it feels when its loaded with your gear, how does it respond on gravel or dirt roads.

You, the key component

Bear in mind that you will be riding during long days in lonely places, maybe 6 or 8 hours each day. You have to be up to the challenge :

You already know where you want to go (Ruta 40), now it is time to plan your trip:

This rough outline can be improved and refined, perhaps spend a day or two at some town along the road or take a side trip to visit some remarkable landmark.

We have many tips and suggestions at our: > > Plan your Trip webpage

Alone or as part of a group?

If your journey is one of personal discovery you should do it alone. It gives you flexibility, independence and quality time with yourself.

But riding in a group is great: you have company, you can share the experience and if problems arise you can count on the group's help.

Traveling with a group does require some basic rules to avoid conflicts later during the trip.

Tips for a "Solo" Journey

Be independent but sensible:

Let friends and family have your itinerary just in case there is an emergency.

Take only the basics. Use critical eye to go over what you are going to carry with you and leave the superfluous behind.

Carry a paper list in your wallet with name, address, phone, mobile of people to contact in case you have an accident. Include your travel insurance details, medical information (allergies or medical conditions).

There are apps that can track your course and you can share this with friends and family. Bear in mind that solitary places along Ruta 40 do not have mobile coverage or inernet.

Eate well and keep hydrated. Hunger and dehydration can distract you and make you feel sleepy. Keep alert and health.

Your motorbike should be comfortale and reliable:

What you take with you depends on the type of trip you will be taking: stopping at hostels, inns or hotels you will need different gear than if you plan to camp along the way.

The main issue is: lack of space, so, where do you put your gear?

Things that you Must take with you

Camping on a motorcycle journey can be an issue: you have to carry the tent, sleeping bag, cooking gear and food, which means at last some 60 lbs (30 kg) of extra weight.

It also requires time to unpack, set up camp, get your meal ready and, in the morning, lifting camp and repacking. It can take a couple of hours each day.

However it gives you freedom to stop wherever you want and is cheaper than stopping at hotels.

A longer list of Things to take with you

You will be in your "riding" clothes 10 hours each day, and you will sleep another 8 hours, that leaves you with 6 hours of free time for using "normal" clothes: you won't be needing too many "normal" garments.

Know how far you can ride on a full tank with maximum load.

Keep your gasoline tank topped up.

There are several tourist operators that offer motorcycle tours along Ruta 40, these are some:

Drive safely, don't do reckless things, obey the rules of the road when overtaking or stopping.

Rest and keep focus. Riding for 6 hours under nasty weather conditions can sap your energy and distract you.

Be prepared for rain, sleet, side wind, dust, cold and heat.

Choose the best time of the year to ride Ruta 40, it will influence the gear and clothes that you will have to take with you.

The local folks know their area so you can ask them about road conditions, weather and where to stop, fill your tank or catch a bite.

Police stations, tourist information centers and the provincial or national department of transportation posts can also be sources of useful information.