The Natural Reserve of La Payunia on Ruta 40 protects a vast volcanic field, with basaltic flows, volcanic cinders and multi-colored vocanic cones. It is located in Malargüe, Mendoza province.

La Payunia, also known as Payún o Payén is located in the district of Malargüe, in Mendoza province.

It is a vast volcanic region located in the Andean foothills.

The volcanic field is much larger than the Natural Reserve created to protect part of it. To the north it reaches the Llancanelo Natural Reserve (a wetland -paradise for bird watchers), to the south it extends westwards beyond the río Grande.

It protects, among others, the Payún Liso, Payún Matrú, Morado and Santa María volcanoes. The cinder field "Escorial de la Medialuna" and the basaltic flows of the volcanoes located to the east of the río Grande.

The area is also an important bird conservation area.

The Payen ecosystem is adabted to the dry windy conditions of the area and to cold winters and hot summers.

It is home to over ten thousand guanaco, two species of puma, armadillos, chinchilla and endemic lizards.

How to reach la Payunia? 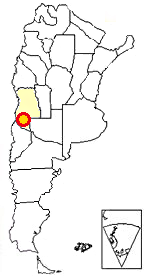 Payunia is located central-western Argentina -Red circle in this map

You can reach Payen along Ruta 40; see our English language webpage: Section 9, from the village of Barrancas Neuquén to the small town of Pareditas in Mendoza (See Google Map of this section).

It is not completely paved and some parts of the alignment are being paved:

The closest town to Payen is Malargüe:

Full details on the town of > > Malargüe [our Spanish language webpage]

You can visit it year-round, but it is best to avoid high season: July Winter Holidays and January during the summer vacations period.

The weather in the Cuyo Region (Mendoza is part of Cuyo) is very nice during Autumn (Fall) and Spring. Summer can be hot and winters are cold, the relative humidity is low:

A Description of La Payunia

Known as the "Basaltic province of Payenia" it is located at the foot of the Andes between 33°40’S and 38°S.

La Payenia has over 800 monogenetic volcanoes (that means that they are made up of one type of rock) and very few polygenetic cones (made up of different kinds of rocks - like the Chachahuén, which is around 6 Millon years old, and the more recent Payún Matrú and Nevado).

The volcanic region of la Payunia extends southwards into the province of Neuquén: the volcanoes of the Auca Mahuida volcanic shield and the El Domuyo and el Tromen volcanoes (Ruta 40 skirts the slopes of the latter, close to the towns of Chos Malal and Buta Ranquil).

It had two peaks of volcanic acitivy, the oldest between 26 and 8 Million years ago. A more recent event took place between Million and 40 thousand years ago.

The oral traditions of the native people suggest that they witnessed some of the Payen's eruptions.

It has all kinds of volcanoes and volcanic outflows: magmatic, with water and without water.

It was nominated to the UNESCO in 2011, as a World Heritage Site.

The region is a transition between the Patagonian steppe and the Monte region (trees and shrubs).

In his bookTopografía Andinia, Manuel José Olascoaga states that Payén is a native word that means "where there is copper mineral".

However, in the native Mapuche language, the words Payén and Payún, mean "Beard". Therefore the Payún Matrú volcano would mean "goat's beard". To make the words more pleasant to the ear, the region is known as Payén and the volcanoes, Payún.

Another version, by Father Augusta (1916) says that "Pillán", in Mapuche language, means "Volcano".

How was the volcanic field formed?

It is located in a "retroarc" area, east of the Andes, where the continental crust thinned and weakened as the Andean arc moved west. The oceanic crust (Pacific Ocean) is subducted breneath the continental crust, and magma melting from it as it moves down into the Earth's mantle, rose upwards flowing across the surface as lava flows:

The image looks south, the Pacific Ocean is on the right side. The frontal arc of continental crust (1) and (4) collide with the oceanic crust (2) wich subdcuts under it towards the mantle (3) causing the folding (4) of the continental crust that created the Andes.

As the sea-floor moves downwards it melts (5) forming magma which being less dense, rises towards the surface, producing volcanic eruptions (6) in the magmatic arc.

The continental crust becomes thinner behind the arc; this is an area known as the "retroarc" (shown in a blue square in the image), (7), here the mantle produces magma which spills along the surface as vast lava flows (7). The arrows whow the movement of the tectonic plates.

La Payunia is located roughly 100 miles (160 km) from the town of Malargüe, and the roads in the Park are in bad condition. We suggest that you book an excursion in Malargüe, it is the easiest way to visit the Payunia.

The northernmost part is closer to Malargüe. If you feel you are up to it, you can drive it: Leave Malargüe head south along Ruta 40 (after 23 km) turn east along provincial highway (RP) RP 186, paved along its first 9 km. When you reach km 20 along it the road forks. To the right, southwards is the access to El Payén ("Payunia"). If you continue straight you will reach the Llancanelo Provincial Reserve, a wetland and bird conservancy area.

Further south you can reach Pauyunia from the place known as "La Pasarela". We describe both areas bfurther down.

Below are the maps

Maps on how to reach la Payunia

This is the area closest to Malargüe. The following map shows how to reach Llancanelo and the Malacara, Trapal and Carapacho volcanoes: Google map Area close to Malargüe.

To reach the southern part of the volcanic field, head along Ruta 40 beyond the hamlet of Bardas Blancas; see This Map which shows how to reach "La Pasarela" along Ruta 40.

Map from Malargüe to Llancanelo

The Malacara Volcano is around 450.000 years old and is a hydromagmatic volcano. Its name is due to its similarity to a "malacara" horse: one with a white spot that extends from its brow along its snout, like a line. Malacara in Spanish means "bad face".

A hydromagmatic volcano is one that formed when the magma rising from the mantle interacts with water held in the rocks or an aquifer.

This mixture of lava and superheated steam provokes a violent explosive eruption with yellow colored lava. Once the water supply is exhausted, lava flows with its typical black color.

The Malacara stands 1800 m (5,900 ft) above sea level (Mapa showing its position and it has three nested cones made up from different rocks that were eroded by the rain to expose the deep-yellow-tinted hydromagmatic deposits.

Erosion also formed a network of caves and caverns in the mafic lapilli rock deposits (lapilli is volcanic rock with a size of 6 to 24 mm -1⁄4 to 1 inch. Mafic means rocks containin silica, magnesium and iron).

Malacara volcano is located on private property and can only be visited in the company of a guide.

Driving along RP 186 you can visit other volcanoes: To the north on the western side of Llancanelo Lagoon, is the Trapal volcano (see map) which reflects in the lake's waters. It is 1.472 m (4,826 ft) high.

Volcanoes to the South

To reach the southern volcanoes, drive south along Ruta 40 from Malargüe, drive past the tiny village of Bardas Blancas. The highway runs along the western side of the río Grande River (Spansh for Big River) until it reaches a place called La Pasarela, where Ruta 40 crosses the river to its eastern bank, turns right and heads south.

La Pasarela (which means "boardwalk", "pedestrian footbridge" marks the spot where the lava flows from the Payen reached the río Grande River. The river dug out a deep narrow channel in the black basaltic rocks to break through the natural dam.

It has its sources in the Andes and has a general north-to-south direction. It flows into the Colorado River which flows into the Atlantic Ocean. Its total length is 275 km (170 mi.)

The lava at La Pasarela are mostly of the pahoehoe type, which in Hawaiian language means "soft". These are flows in which the lava resembles cords. It cools down forming ondulated surface due to the wave-like movement of the lava flowing beneath the solidifying surface.

This lava dammed the río Grande, an event that has been dated to 41,000 years ago. The volcanic cones on the west side of the river have no lava flows, but are of the same age.

The terrain to the east of the river is rough and abrupt. There are many tiny volcanoes in the area.

This region is known as Las Pampas Negras or "Black Pampas", where "Pampa" is a Mapuche word meaning "flat". It is formed with coarse granulated black lava. Here is the Morado Volcano:

Its name (means "pruple" in Spanish) is due to the color of its lava flows, which have rusted to that color. See photo bwlow (Map showing its location).

To the southeast is the Payén Liso volcano:

It is an enormous "caldera" 8 km wide (5 miles) with a semi-permanent lake inside of it.

The Payún Matru Caldera was formed during an explosive eruption which took place around 168,000 years ago. (Map).

The image below shows the ancient lava flows that are clustered as lobes around the volcano. There are other darker flows ("Coladas de Lava" in the map) which are more recent and which came from rifts and faults on the northern and western side of the volcano (left and upper part of the image).

Smaller volcanic cones can be see to the left and right of the Payún Matrú; them mark the "Carbonilla fault".

To the east of the Payún Matrú is the pahoehoe lava flow of the "Pampas Onduladas" ("Wavy Pampas") which is 181 km (112 mi.) long: the longest Quaternary Period lava flow in the world.

The cráter is surrounded by "volcanic bombs" or "pyroclasts" which were formed by fluid viscous lava blocks ejected from the volcano and which cooled down after impacting the surrounding terrain.

This is the end of the tour

Tips and Suggestions for visiting the region

There is a large temperature swing between day and night.

Expect snow and frost in winter.

To the south of Malargüe Ruta 40 crosses the foothills of the Andes, the highway has plenty of curves and ups and downs. It becomes in some parts a winding mountain road.

Gravel. Some segments of the road south of Malargue are not paved, drive with care.

In winter, snow and ice can accumulate on the road in the southern part of the itinerary towards Neuquen province.

Fill up your gas tank before setting out: the distances to cover are great and you will not find fuel along the way (more below).

Carry water, foood, warm clothes and a blanket in case you have to spend the night in the car. Even in summer it can get quite cold.

There are service stations on Ruta 40 in Malargüe, El Sosneado, Barrancas, San Rafael and San Carlos. 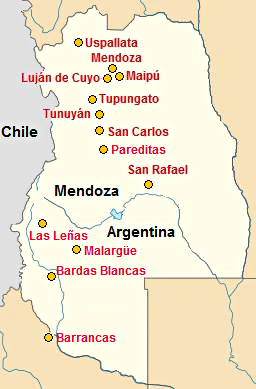