Ruta 40 in the Calchaquí Valley

The Quebrada de las Flechas Canyon located between the towns of Cafayate and Angastaco, Salta: here Ruta 40 runs along the Calchaqui Valley crossing the amazing canyon with its rock formations, protected as a Natural Monument.

What is the Quebrada de las Flechas? 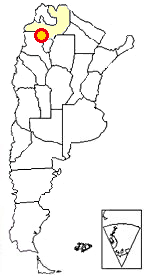 This "canyon" is located in the central part of the Valles Calchaquíes (Calchaqui River Valley). And Ruta 40 runs right through it, this lunar landscape is:

When to visit the Quebrada de las Flechas?

Autumn, Spring or even winter are the best seasons to visit the area:

Itinerary and Tour of the Canyon

Getting to the Quebrada de las Flechas

The section of Ruta 40 that is aligned through the canyon and the Angastaco Natural Monument is described in detail in Section between Santa María and Cachi.

Head north along Ruta 40 starting out from the town of Cafayate [our Spanish language webpage], (km 0), best known for its Calchaqui Valley wines (Its remarkable Malbec and the white Torrontes wines). It is also the location of the well known Quebrada de las Conchas Canyon. Do spend a couple of days in Cafayate.

Ruta 40 is paved up to the small town of San Carlos (km 24) and then continues nortwards as a gravel surfaced highway.

Accommodation: > >
Hotels in Cafayate and in San Carlos

The Ruta 40 crosses to the eastern side of the Calchaquí River (km 52) to bypass the rugged hills on its western bank, and passes through an area known as Santa Rosa that produces bell peppers used in sweet paprika. There are few trees and bushes (algarrobos, jume, jarilla). It crosses the quebrada de Piscuyacu, a gully which only carries water during the summer rainy season, from the summits of the Sierra de La Apacheta range to the east (Apacheta is the native name for a mound of stones, frequent in the Andean area, built to appease Pachamama or "Mother Earth").

At Piedra Pintada ("Painted Stone") at km 61,5, Ruta 40 curves west and crosses the Calchaquí river. North of this point, the wide Calchaqui Valley becomes narrower and passes through the narrow gorge known as Garganta or Paso de las Flechas.

At this place, Piedra Pintada once stood the "old" Jesuit Mission. Ahead, you can see the inclined rock strata of the Angastaco Geological Formation: Here begins the Quebrada de Las Flechas.

On the western side of the Calchaqui River Valley, Ruta 40 enters the canyon and winds it way through its different sections:

Its name in Spanish means "The Pond Canyon", it meets the Calchaqui River at right angles and Ruta 40 runs along its central part.

Te name means "The Glacier Cut", here the wind and rain have ereoded the soft sandstone, shaping it to resemble the craggy front of a glacier, but instead of ice, it is made up of stone.

The "Arrow Cut", here is the angled strata of the Angastaco Formation, and they do look like arrowheads.

The name "Quebrada de las Flechas" actually corresponds to the gorge through which the Calchaqui River runs between Angastaco and Piedra Pintada. To the north you can see the mountain range of the Sierra de la Apacheta with its deep Quebrada Chambao. South and West you are surrounded by the Quebrada de las Flechas.

Named after a surname, Saya. It was formed by a creek which has its sources to the west in the Sierra del Cajón (or Sierra de Quilmes). There are concrete protections to your left, to keep the road clear of the rocks dragged by the heavy summer rains. It is located just south of the village of Angataco, whose entrance road is just ahead, after crossing the creek, to your left.

"Canyon Cut", it runs across the Calchaqui River's valley base, next to Angastaco and is the end of the "Las Flechas Canyon".

The Tour ends here: access road to the village of Angastaco at km 72,5. It is one mile to the west.

Full details on the town of > > Angastaco [our Spanish language webpage]

See This Google Map of the Quebrada de las Flechas.

Another Map of the Quebrada de las Flechas (Image) showing the places mentioned above.

Ruta 40 is a gravel, dirt and sand road crossing fords that are dry most of the year. Narrow road with some sharp curves and some inclines.

Some villages with basic services. Fuel in Cachi y Cafayate. There are hotels along the way.

Information on the Monumento Natural Angastaco

It is on the Ruta 40 between Cafayate, San Carlos and the village of Angastaco in the Central part of the "Valles Calchaquíes", between mileposts Km 4380 and Km 4410.

It is located in the San Carlos Departament in the province of Salta.

The "Monumento Natural de Angastaco" was created by provincial law 6.808 in 1995.

Purpose of the Natural Monument

Protect the peculiar rock formations in the Canyon and the ecosystem

Close to San Juan City, and also next to Ruta 40 is another Quebrada de la Flecha.

In 1558, During the first Calchaqui War, Spanish officer Luis de los Hoyos wrote that close to where present Angastaco is located, stood an Inca fort. Diego de Almagro, had also mentioned it during his 1535 expedition: The stone "pucará" or fort, was located on the right bank of the Calchaquí River, facing the confluence of the Angastaco and Calchaqui Rivers.

You can still see its wlalls and its rectangular shape which covers almost 9 acres of terrain, and was dated back to 1414 - 1461.

A contemporary chronicle tells us that he reached "... Tucumanahao in the Calchaquí Valley where he was cordially received by chief Tucumán, the main lord of the Valley. He was the one who had kindly hosted Rojas and given him supplies."

Tucumanahao had a native temple or mochadero a sacred spot of the Calchaquí nation. In the early 1600s, the missionary fathers Darío and Morelli a comienzos del 1600 burned the idols and destroyed the temple.

Shortly after a Spaniard Juan Ortiz de Urbina and his son in law Lorenzo Fajardo were assigned the local natives (a system where the natives worked for the Spaniards who in compensation, "civilized" them). At that time the "Flechas Canyon" was known as Acsivil or Acsibi or Accibil. They overlord and his family were massacred during a native uprising in 1630.

The first of the Calchaqui Wars razed all the Spanish settlements in the area (1630). In 1642 two towns were founded in the Calchqui Valley: San Carlos de Anguingasta and "El Alto San Carlos" in Tucumanahao at what is now Piedra Pintada, here was the "mission".

During the last Calchaqui War (1657-58) both were destroyed and abandoned. The Jesuits never returned to the Valley.

The remains of the old mission are at the place known as "old winery" on the right bank of the Calchaqui River. Now there is a cross and a chapel there.

Below are two photos taken in 1897 during Ambrosetti's expedition; they depict the cross at the ruined mission and the narrow gorge of "Garganta de las Flechas": 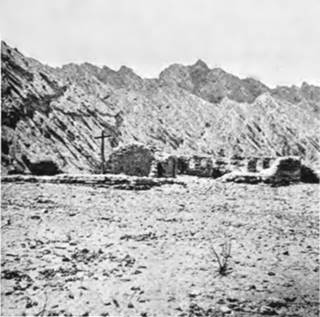 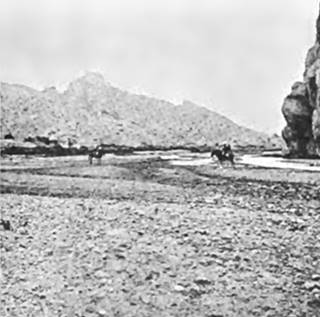 Chronicles from The 1800s

Among those who explored the area was Ambrosetti (1897) he wrote:" After passing by San Carlos and fifteen leagues [47 miles] from Cafayate, the vally has an anomaly: it is the Garganta de las Fechas through which the Calchaqui River passes between enormous blocks of sandstone that stand on both sides like cyclopean walls."

Ambrosetti also mentioned that during the Spanish conquest there was a large population in the area as proven by the stone fences in the fields and the ruins of the old Jesuit mission.

Johan Jakob von Tschudi, a Swiss naturalist explored the area in 1858 and described the Quebrada de las Flechas as follows:These mountains are torn and canyons with very inclined layers and deposits of green shale, syenite, quartz, etc. similar to strata. These sharp, angled and tooth-shaped summits, eroded by water, frequently display the most oddest shapes. The mountains lack vegetation and the Valley now and then has some greenery [...] after several hours iin this labyrinth of mountains, we reached a beautiful open valley with a lovely view of the tall mountains of Cachi, covered with eternal snows, it was one league from the friendly village of El Carmen [Angastaco]".

French scientist Victor Martin de Moussy described Angastaco (Del Carmen) and the Las Flechas Canyon in 1864: "After Molinos comes the Del Carmen Department [...] The Valley has some remarkable narrows, specially one, known as Troya de Flecha [Troya = Trough, gorge] almost one kilometer long, dug out by the river through the sandstone mountains that blocked its course."

See the Mapa drawn by de Moussy, where you can see Carmen and next to it, "La Troya de la Flecha".

The Calchaqui Valley is a natural depression with a North-South alignment and the Calchaqui River runs down it. At Angastaco the valley takes a sharp turn, heading east.

The river here meets the mountain range known as Sierra de La Apacheta; it was formed by riverine sediments during the Neogene (last 20 My) that were folded and faulted, part of the Payogastilla group of the Angastaco Formation.

The Sierra de La Apacheta range folded during the Diaguita orogeny (1.3 My ago) whose southern tip blocked the valley like a large dam, The river formed a lake upstream about 10 miles long north of Angastaco.

The river wore its way into the dam as it flowed over it, forming the narrow gorge of Paso La Flecha which is 5 miles long.

At the end of the gorge it turns again, heading south following the El Zorrito fault.

The Quebrada de las Conchas sediments date back to the Mid Miocene (13.4 My ago), the upper part of the Angataco Formation is the Palo Pintado Formation, 3.750 meters thick (2.3 miles). Consisting of three sections:

Origin of the sandstone

The sediments were laid down in a river system with wide channels frequently covered with sediments during floods, that formed a sandy floodplain in a very hot and dry climate.

The Andean orogeny lifted them and then wind and water erosion shaped them. The more friable sediments (the ones that wear away easily) were removed while the tougher rocks remained causing the effect of channels between outcrops of "flaked" rocks.

Formed by snowmelt from the ranges to the north and west, it has a mean flow of 40 cu ft⁄sec in November and 1,081 cu ft⁄sec in February.

The highest flow is during the summer snowmelt and rainy season.

The river's waters pick up salts from these Neogene rocks as it flows through the Paso de Las Flechas: CaSO4, sat (NaCl) and Na2SO4, which make its water "hard".

Tips and Advice for Travelers

1. Weather in the Valles Calchaquíes

It has a very dry climate with low relative humidity. Rainfall is concentrated during summer from Nov. to March. Large temperature swings between day and night.

Clear sky and sunny during most of the year (use sun block). Winters are cold but sunny. No snow.

This can cause headache, dissiness, nausea, fatigue and exhaustion.

Read all about it: Altitude Sickness

This is a gravel surfaced mountain road: narrow and winding.

Check out road conditions before setting out.

When it rains in the mountains during summer, there may be mudflows that cut the fords and the dry river beds turn into gushing rivers. Just take a look a the concrete walls that jut out at 45° from Ruta 40 in the Quebrada close to Angastaco: they were built to deviate the flow of rocks mud and water away from the highway.

Loose Gravel. Drive carefully on the gravel, it is slippery, you can skid, the dust may impair visibility, passing vehicles may fling stones at your windshield (cracking, chipping or even breaking it. Take extra insurance when you rent a car).

Find your hotel in Cachi

Accommodation at the Quebrada de las Flechas in > >
Angastaco

Hotels in the region...

Map: Cities in Salta and in Jujuy Provinces near Ruta 40 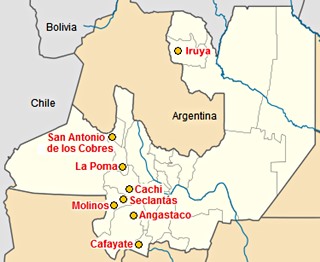 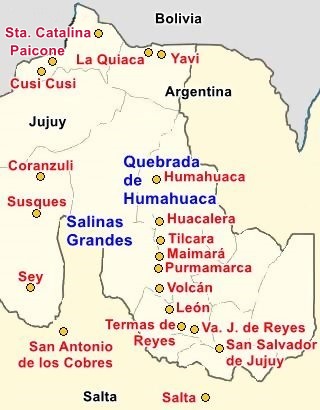