The Red Rocks and Soil of Talampaya

"One of the best 10 Attractions on Argentina's Ruta 40"

Talampaya National Prk conserves and protects rock formations that date back to the age of the first dinosaurs: the Triassic.
Landforms of multicolored stone such as Talampaya Canyon, The Botanical Garden, The Lost City ("La Ciudad Perdida"), Rainbow Canyon ("El Cañón del Arcoiris") are some "MUST SEE" sights in this National Park and World Heritage Site of UNESCO.

It is very close to Ruta 40 in Villa Unión, La Rioja province, Argentina.

The red cliffs at Talampaya

It is a National Park, created in 1997, based on the Provincial Park established in 1975.

Its purpose is to protect the archeological remains and the paleontological resources of the site.

It was designated a World Heritage Site of UNESCO together with the adjoining Ischigualasto Provincial Park, in 2008.

How to get to Talampaya 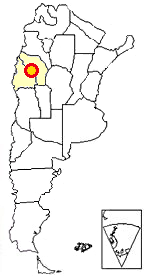 You can get to Talampaya from Villa Union, a town located on Ruta 40's Section from Guandacol to Alpasinche

Villa Unión is a relatively large town, with all the services that a traveller needs (hotels, ATM, police station, first aid, restaurants, stores and service station).

It is a 58 km drive from Villa Union to the park. Head west from this town, along the paved highway Ruta Nacional 76, all the way to Talampaya. See this Map with directions

Fill up your gas tank before leaving town there are now service stations on the highway.

Find your Hotel in > >
Villa Unión

Closer to the park is the small village of Pagancillo, with accommodation. A bus daily line links Villa Union and Pagancillo with the provincial capital of La Rioja city.

Find your Hotel in > >
Pagancillo

On the km 148 milepost of Ruta 76 is the Cañón de Talampaya Service Area and the administration of the park. Here is where the excursions that visit the Talampaya Canyon (Cañón de Talampaya) and Don Eduardo Gully (Quebrada Don Eduardo) leave from. It has a place to eat, handicraft stores and a camping area.

Heading south, along Ruta 76, at km 133,5 milepost is the second Service Area, where the tours to Ciudad Perdida and Cañón Arco iris. (Lost City and Rainbow Canyon) depart from.

When Should You Visit Talampaya?

You can visit it throughout the year. High season is Easter and the Winter School Break (July).

Spring and Fall have the best weather, it is not too hot or too cold, but it is sunny and dry.

Winter can be very cold, and snow can fall on occasions. Temperature goes below freezing point.

Summer is very hot and it is the rainy season. Rain can interrupt excursions.

Both Talampaya and neighboring Ischigualasto Park were designated as a World Heritage Site in recognition of their unique geology which contains the only sequence of continental sediments dating back to the Triassic Period some 200 million years ago.

The Triassic was the period during which a group of reptiles evolved into dinosaurs, who in turn ruled Earth for 150 million years.

The meaning of the name Talampaya

There are several conjectures, but the most accepted one is that it comes from the extinct Diaguita language and means "The dry river of the tala", where "tala" is a local plant, Celtis spinossissima.

You have to pay an entrance fee (cash only) to visit the park. There are different prices (for local residents, pensioneers, foreign visitors, students, etc.)

For those camping there, it is open round the clock.

They can be paid with credit or debit card an cash. You can book them at the Service areas. A guide is always necessary.

There are different types of exursions, you can ride the vans of the tour providers, hike or go on bicycle. There is also a Full Moon excursion, on full moon nights. 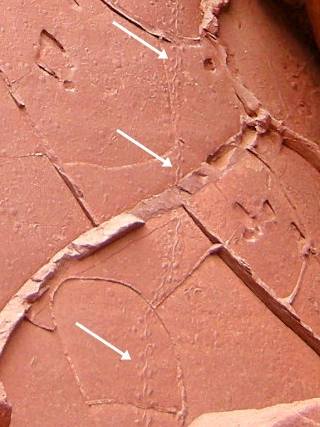 Fossilized lizard tracks in the red sandstone (arrows). A. Whittall 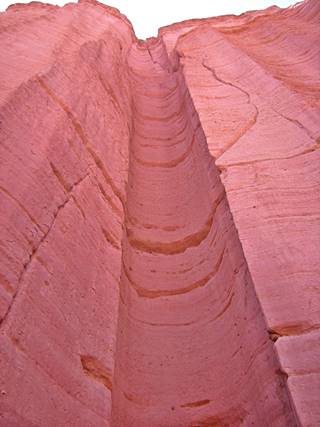 ’La Chimenea’ (The chimney) in the red cliffs. A. Whittall

Advice for those visiting the Park

A map showing the main sites in Parque Nacional Talampaya: 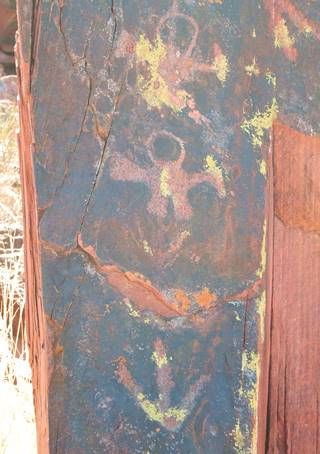 You cannot go with your car beyond the parking space in each of the service areas.

You can get your camping permit at the Cañón de Talampaya service area. There is a fee for daytime use and for staying overnight.

Register in the information desk.

All hikes require the company of a local guide.

The fossils and archeological remains are protected by law (Argentine Law 25.743), so don't touch, remove, dig up, buy or carry this kind of article. It is a crime.

Keep your environmental impact to a minimum: don't gather fire wood, light fires or litter. Take your garbage back home with you.

Tips for your comfort

Wear comfy shoes during the tours, you will trek along dry sandy river beds.

There is no mobile signal in the Park.

You can eat at the Service Area and buy food there. There are rest rooms, showers and a camping area there.

This Park and neigboring Ischigualasto Park, are very important sites due to the abundance of Triassic fossils.

Birds. Despite its arid climate, you can sight differen birds such as condors, who nest in the walls of the cliffs. As well as a variety of South American ostrich, the Suri or ñandu.

The mammals include gray foxes, a small armadillo (pichi-ciego), a large sized chinchilla (chinchillón) and the ever present camelid, the guanaco.

Guanaco in the red sands of Talampaya

There are different areas within the park with different vegetation:

On some of the mountain slopes the chica, an endemic tree can be seen, and in the wettest areas, you can see some open woods of the algarrobo tree. In Los Cajones some molle trees grow, with their pepper-flavored seeds.

The sites of pre-Hispanic natives have been dated to to a period spanning from 640 BC to 1180 AD. These people used the caves and rock shelters to live in and to bury their dead.

There are four sectors with rock art, not painted, but incised into the rock:

225 million years ago there was one gigantic continent which during the Triassic Period split into two mega-continents: Laurasia (comprising Asia and North America) and Gondwana (Africa, South Americ, India, Australia and the Atractic).

In what is now the central part of Western Argentina, long and narrow tectonic faults formed (they are known as "rift valleys").

During the Triassic, they filled up with sediments eroded from the surrounding hills. One of these faults was the Ischigualasto-Villa Unión rift, which also included Talampaya.

This is the first period of the Mesozoic Era, the "Era of the Reptiles". It got its name from the three different rock formations identified by Friedrich von Alberti in 1834 in Germany when he described this period. He called them "Trias".

It had a warm but dry climate at that time.

It is quite unique because it holds up to 20,000 ft (6.000 meters) of continental sediments. The fault split the ancient Paleozoic rocks, which form the rift's base and runs along the valley of what is now the Bermejo and Guandacol rivers.

Different layers of sediment covered the fault creating what geologists call "Formations". There are six geological formations in the Talampaya, Ischigualasto and Villa Union basin. And they reflect different cycles during which humid periods formed marshes and floodplains and then dry periods created desert conditions.

These formations are, from the oldest to the most recent one, the following:

The oldest (252 to 247 Million years old). Wet period with ephemeral lagoons. The rocks have a pale red and pink tint. They only contain fossil tracks and foot prints of reptiles, that looked like crocodiles or dinosaurs. You can see this formation in the "Cañón de Talampaya" canyon and the "Lost City" (la Ciudad Perdida).

Age: 247 to 237 million years. Dark red and brown rocks can be seen in the uper part of the Cañón de Talampaya canyon and the Rainbow Canyon (Cañón Arco iris). Few fossils (of dicinodonts). Dry arid climate.

This formation was deposited in a lake that formed here some 235 million years ago. It has whitish sediments and many fossils of reptiles that lived along its shores. This is the lower and mid Triassic Period, and these reptiles were the ancestors of both dinosaurs and mammals, they were Therapsida.

They can be classed into two groups: the Dicynodontia, the size of a bear with a beak like that of a tortoise; and the smaller Cynodontia from which modern mammals descend.

Gray and bluish rocks from the Chañares in Ischigualasto:

This formation is made up of sandstone 230 million years old. Some ar black, others dark green or yellowish. They were laid down by rivers during a wet period, during which lakes and marshes with lush vegetation covered this area, the trees formed the veins of coal that have been found here. It was during this period that Gondwana began to split apart, with Africa and South America rifting to form the infant Atlantic Ocean.

This formation contains sediments from the Upper Triassic (227 million years ago); they are grayish and brown. Formed in the base of a valley that was flooded by a river during a wet period. Fossils of dinosaurs have been found in the mud of this ancient river, with petrified trees.

The first dinosaur, the Eoraptor was found here.

The Los Colorados formation spans a period from 227 to 200 million years ago, this is the beginning of the Era of the Dinosaurs: the Upper Triassic.

Dry and humid periods alternated and the red rocks owe their color to the iron oxide in the sediments.

It has fossils of Archosauria, with large herbivore and meat-eating dinos as well as mammals and some trees that resemble monkey puzzles.

Then, after almost 150 million years of supremacy, a meteorite wiped the dinosaurs out 65 million years ago. Shortly after the folding and uprising of the mighty Andes took place. This is now the Tertiary Era, and the sand, clay and rocks eroded from the newly formed Andes lay down the deposits of the "San Nicolás" rocks group.

As the Andean mountain range rose higher, it uplifted the Talampaya area with it, and the Talampaya river eroded the surrounding terrain forming the sheer narrow canyons we can see today.

Tips and suggestions for visiting Talampaya

It has an arid continental climate, with very low relative humidity. The dryness of the air provokes large temperature swings between night and daytime.

It can freeze at any time between May and October.

Dry conditions prevail and only 6 inches - 150 mm of rain fall each year, mostly during the summer rainy period, in downpours which can flood the dry rivers and interrupt excursions in the Park. The rainy season extends from Nov. to Mar.

The hot dry "Zonda" wind blows from the Andes between July and Oct.

There are quite a few hotels in neighboring Villa Union, see below:

Find your hotel: > > in Villa Unión

Find hotels in other towns close to Talampaya Park