The Inca Trail and the Ruta Ruta 40

Information about the Inca Trail or Qhapaq Ñan and its alignment. It runs close to Argentina's Ruta Nacional 40 highway in the country's Northern and Cuyo regions.

What is the Inca Trail?

In the native Quechua language the words "Qhapaq Ñan" mean "main road", and it is applied to the vast road network that was the backbone of the Inca Empire.

It comprised 23,000 km (almost 14,300 miles) of roads and trails that linked the towns, ceremonial centers and military outposts across the empire. And it blends more than 2000 years of the history of the pre-inca Andean cultures.

It runs from Quito in Ecuador to Central Chile, passing through Peru, Bolivia and Argentina. The world-famous Inca Trail that links the city of Cuzco, Peru with the citadel of Machu Picchu is only a small portion of this great Inca highway network.

In Argentina the UNESCO has nominated over 118 km (74 miles) of extant remains of the ancient trail (13 sections in seven provinces) as well as 32 associated archaeological sites.

Just like the Romans, the Incas realized that good communications make the task of governing an empire easier. Control can be exerted swiftly with good roads. So they built the "Inca Trail" using detailed specifications: width, area, distance between "Tambos" (Shelters along the road that contained supplies and served as lodging for itinerant state personnel).

This organized road network on a continental scale is a tribute to the Empire's resources, planning skills and will.

It served the purpose of unifying the empire, crossing deep valleys and climbing across high mountain passes, linking the ocean with deserts, towns, garrisons and jungles.

Messengers known as chasquis conveyed the Empire's orders from "tambo" to "tambo".

Altough there were no horses or mules in the New World, the Inca domesticated and used the llama as pack animals or beasts of burden. They transported goods along the trail, and people walked along them too.

El Tastil, prehispanic site in Salta, on the Inca Trail:

The Inca Trail in Argentina and Ruta 40

When one of the "Conquistadors" of Peru, Diego de Almagro (the other was his partner Francisco Pizarro) set off in 1535 to explore and conquer his newly chartered land of Nueva Toledo located to the south of Cuzco, he became the first European to ride along the Inca Trail in what would later become Argentina.

He left Cuzco seeking gold and riches and followed the native road southwards, into Argentina and on, into Chile.

The chronicle of Diego de Almagro's journey, when the Inca Trail was well upkept is a very useful reference for modern historians in trying to identify its alignment in the lonely Andean wilderness. Below is his itinerary:

The Inca Trail in Jujuy

Diego de Almagro's journey along the Inca Trail in 1537

The Spaniard crossed into Argentina from Bolivia, close to what today is the village of Santa Catalina (close to Ruta 40 in Cienaguillas) he headed south passing through Moreta in the pass of the Sierra de Cochinoca range and through Casavindo el Chico and Rinconadillas. He walked along the Salinas Grandes salt flats, reaching the Tambo del Moreno, where the village of El Moreno now stands.

From there he crossed into the province of Salta, towards the Inca settlement at Tastil.

Another branch of the trail went south along the UNESCO world heritage site of "Quebrada de Humauhuaca", through Tilcara, Maimará and Purmamarca.

From Tastil (pictured above), on the canyon known as Quebrada del Toro the Inca Trail went south to the Tambo La Paloma, near the town of La Poma on Ruta 40, close by was the administrative center of Potrero de Payogasta (pictured at the top of the page). Here it reached the Valles Calchaquíes Valley. 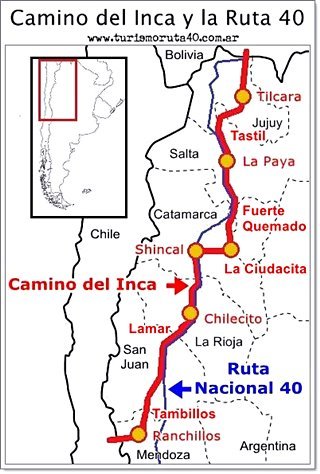 Map of the Inca Trail in Argentina. A. Whittall
In "red" are some of the sites mentioned in the text

Just south of the town of Cachi [our Spanish language webpage] lies an archaeological site which covers 6 ha. (15 acres) and had 250 to 750 residents, it is known as La Paya.

It has stone walls and rectangular and circular buildings, one of them named the "Casa Morada" or "Mauve House". It was the Inca government center of this region and the Inca "curaca" lived here.

From Cachi the Inca Trail that followed the Recta de Tin-Tin (an extremely straight section of the trail) and at Cachipampa a branch took off to the east, along the Escoipe canyon via what is now the Cuesta del Obispo [our Spanish language webpage] road, into the lowlands of Lerma Valley near the city of Salta.

Almagro took the trail that forked to the west, and which runs near the Ruta 40, through Cachi, las Pailas site, Seclantás and Molinos, here a side road headed west to Colomé and Tacuil. It crossed the pass of Abra Blanca into the province of Catamarca.

From Molinos he went to Angastaco, site of the historical village of in the Tucumanahao in the Quebrada de las Flechas Natural Monument. He went south along the Calchaqui River by the site of modern Cafayate [our Spanish language webpage] and then along the Santa María, River into what now is the province of Tucumán, (the Inca province of "Quiri-quiri").

The Inca Trail in Tucumán

The main settlement was Tolombón. The road forked to the east crossing the Calchaqui Range through Amaicha del Valle, Abra del Infiernillo pass ("Tiny Hell Pass") and Tafí del Valle, descending then through the jungle into the Quebrada del Portugués Canyon.

The main Trail followed the Santa María River, a fertile agricultural area. It went past the modern town of Santa María where many ruins of native settlements can still be seen:

The name "Fuerte Quemado" means "Burned Fort" in Spanish, and reminds us of the bloody wars between Spaniards and natives during the Calchaqui Wars that raged between 1560 and 1667 and ended with the destruction of the local native communities, their in Santa Maria, Hualfin, Abaucan, Tinogasta, Londres and Belen, and the relocation of the survivors.

Fuerte Quemado was known as Bacamarca (or Wakanmarka) which meant "the fortress of the temple's frontier" and which predates the Inca occupation by several centuries (the Inca occupied this region between 1450 and 1536).

At the southern tip of the Santa María, Valley, at the tambo of Punta de Balsto the Inca Trail split into three branches:

Almagro took the eastern road, into SW Tucumán and reached La Ciudacita (which is Spanish for "tiny town"). Now it is protected by the Parque Nacional Campo de los Alisos National Park. See this Map showing its location.

From La Ciudacita the Inca Trail descended the slopes of the Aconquija range and headed west to what is now Hualfín, an ancient settlement and site of a fort or "pucará". This is the Map of the site.

Ruta 40 and the Inca Trail ran along the Belen River, southwards through the modern towns of Belén and Londres, and then, onwards to the Inca site of Shinkal de Quimivil:

The Shincal de Quimivil was the Most important Inca settlement in Argentina.

All the way from La Poma to Shinkal, the Inca Trail runs very close to the Ruta 40.

At El Shincal, Almagro left what is now Ruta 40 and headed west along the steep incline of la Cuesta de Zapata, (which was part of the original Ruta 40 alignment), reaching the Abaucan Valley at modern Tinogasta, and the nearby Inka site of Watungasta. From here he followed the "Ruta de los Seismiles" (Route of the Six-thousands, after the height of the dozens of volcanos in the area: 6,000 m or 19,700 ft), crossing the Andes into Chile through the San Francisco mountain pass.

This marks the end of Almagro's route, but the Inca Road continues on, southwards into the provinces of La Rioja, San Juan and Mendoza:

The Qhapaq Ñan in La Rioja

From Tinogasta it headed south to Famatina along the "old Ruta 40" and then along the current Ruta 40 through Chilecito, site of an important "tambo". It then went up the Miranda River Canyon along the pass used by Ruta 40, the famous Cuesta de Miranda Pass.

Here it split, one branch going to Tambillos ("small tambo") and then west to the pucara at Villa Castelli and on to Vinchina and the Pircas Negras pass by Lake Laguna Brava (site of another tambo). The other branch went south through Aicuñ and Pagancillo, following the Bermejo River all the way to Paso Lamar, an inca site on the border with San Juan, close to Guandacol; this is the Map of Lamar.

The Inca used roads built by the local Diaguita natives in their branch of the Inca Trail that ran south from La Ciudacita. This was known as the "Old Tucumanao Road". It crossed the Paccipas Valley between Andalgala and Alpasinche (here it meets Ruta 40 again). It was used well into the twentieth century to drive cattle,

Near Alpasinche is the Fort or Pucara of Hualco, pictured above. From Alpasinche a branch headed west to meet the other Inca Trail at Tinogasta.

South of Lamar the Quapaq Ñan went into San Juan and here it vanishes: It must have headed south (current Ruta 40) to Huaco yand Jáchal to head west towards Calingasta and then south to the tambos in Tocota, Tamberí and Barreal following the San Juan River to its sources. Another branch following Ruta 40 went by the tambos at Talacasto and La Dehesa

Both branches met in Mendoza at the tambo of Tambillos.

Tambillos site ("small Tambo") is (32 km north of Uspallata) and enclosed by a wire fence, but it has a lookout so you can see the site. The Inca Trail went south by Uspallata and then west into the Andes: up the Mendoza River by the ruins of Ranchillos ("small ranches") and Tambillitos ("tiny tambo").

In the high mountain area a segment of the Inca Trail is preserved in the Natural Park Parque Provincial Aconcagua by the mighty 6,995 m tall (22,934 ft.) Mount Aconcagua, the highest peak outside of Asia, entirely located in Argentine territory.

It crossed the Las Cuevas River using the natural bridge of "Puente del Inca" and went into Chile.

According to Canals Frau (1946) there was an Inca fort in the town of Guaymallén next to the city of Mendoza.

Driving along Ruta 40 north of Mendoza you can reach most of the Inca Trail. In Mendoza National Ruta 7 and Prov. Hwy 39 give access to several tambo sites. In San Juan Ruta Nacional 150 and 149 are the access to the tambos in Rodeo, Iglesia and Calingasta.

Ruta Nacional 60 in La Rioja will take you to Watungasta.

In the Cuyo and Northern regions the rainy season coincides with summer. It is also very hot. Spring, autumn or winter are better options: sunny, not too cold (except for the Puna area) during the day (nights are cold). And also low season (except for the July Winter Holiday period).

Find your hotel along the Inca Trail...