The remains of an Inca Town

"One of the best 10 Scenic Drives of Argentina's Ruta 40"

The Shinkal or Shincal de Quimivil ruins are the remains of the southernmost provincial capital of the Inca Empire. It is located in Londres, Catamarca close to Ruta 40.

Its size, the quality of its buildings and the archaeological remains that have been recovered tell us that it was a local administrative center and the capital or wamani of a province during the period of Inca domination of what is now Northwestern Argentina between 1471 and 1536.

Declared a National Historic Monument in 1997.

How to get to El Shinkal? 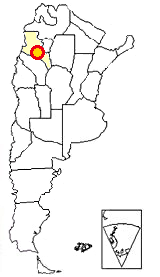 Shinkal is located in Northwestern Argentina, see red circle on this map

We describe the section of Route 40 that passes by the archaeological site of Shinkal de Quimivil as: Section from Alpasinche to Santa María.

When is the best time to visit it?

Spring, autumn and winter are the best time to visit the ruins and avoid the hot and potentially rainy summer season:

This archaeological site is very close to Ruta 40 and the town of Londres in Catamarca province.

Full details on the town of > > Londres [our Spanish language webpage]

The Hondo River to the north and the Quimivil River to the south provided it with water for irrigation and human use.

At the main entrance. There is an admission fee to the site.

There are bathrooms (also for people with special needs) at the site.

The local bus line "El Condor" links it with the towns of Belén and Londres.

From Londres to El Shincal

From Londres leave the Ruta 40 and head west along Calle 9 de Julio Street.

See this Google Map from Londres to Shinkal.

Full details on the town of > > Belén [our Spanish language webpage]

Find your Hotel in > >
Belén

It was built at a strategic point which had been in pre-inca times an otinkuy, that is a "meeting point" for the local native Diaguita people.

It was located between the Hondo and Quimivil rivers before they vanish into the dry sandy area known as the "Campos de Belén". A closed basin to the east.

It protected the southern access to the Hualfín Valley.

It has almost one hundred stone and masonry buildings; these are the main ones: 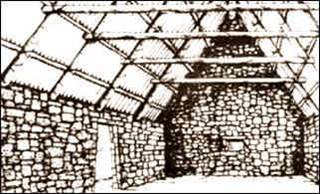 The main Inca Trail left the village of Ciudacita in the Nevados de Aconquija mountains on the provincial border between Tucumán and Catamarca. It ran west to the Inca settlement at Hualfín and turned south along what is now the alignment of Ruta 40 through Belén, Londres and Shincal.

From Shincal it goes through the "Cuesta de Zapata" which is a pass across the Zapata Mountains, and was part of the "old" Ruta 40 alignment. It reaches the Abaucán Valley and the Inca site at Watungasta near the modern town of Tinogasta. ("gasta" is the suffix that meant "town" in the Diaguita's Kakan language).

A branch then ran south into the provinces of La Rioja, San Juan and Mendoza

El Shinkal de Quimivil Panoramic view of the site and its main buildings:

Shinkal Meaning of the Name

There are many versions about the origin of the name "SHINCAL":

The best known one says that it is a phonetic deformation of the name of a local bush, the Shinqui. This is probably a Kakan word (the lost language of the now vanished Diaguita people). It is a thorny bush known nowadays as chilca (Flourensia campestris).

Another version says that wen Adán Quiroga discovered the site in 1901 it was covered with this bush whose Quechua name is "chillka" or "chillika" so the place was known as: "Shincal".

Quimivil, the other part of the name

The place's name has a second word, written ad Quimivil or Quinmivil. It is probably a deformation of the word Quilmevid, which was the way that Gaspar Doncel wrote it when he founded the city of "Londres" for the third time on May 24, 1607. This third foundation was named "San Juan Bautista de la Ribera" (Spain and England were at war and Londres -Spanish for London- had become unpopular). The town was built where Belén is nowadays.

Like the first two, it was destroyed by the natives during the Calchaqui Wars.

The name "Quimivil" is a clear reference to the Quilmes (or Kilmes) people, of Diaguita origin, as suggested by historian Lafone Quevedo, who in the late 1800s was sure that the Quilmes had lived here in the "Valle de Londres", then, escaping from the victorious Spaniards, they fled to Tucumán, to what now is the site of "Ruinas de los Quilmes" on Ruta 40.

So the place known as "Quilme" and "Vil" which meant settlement, so "Quilmevil" means: "village of the Quilmes".

Another version says that Quimi means "post" or "idol" (totem), hence: adding "vil" to it leads to "Village of the idol". The Diaguita people vernerated painted and decorated posts.

The town of Londres next to Shincal was first founded by the Spanish conquistador Pérez de Zurita, on June 24, 1558. He located it in the Shinkal site proper.

He proclaimed the city on the stairs of the Ushnu and named "Londres" (Spanish for London) to commemorate the coming wedding of Phillip II, King of Spain and Queen May Tudor of England, the Catholic daughter of Henry VIII.

It was an impressive Inca town

Spanish conquistador Diego de Almagro passed by El Shincal on his expedition into Northern Argentina and Chile in 1536 after the fall of the Inca Empire to Francisco Pizarro.

A Spanish chronicler wrote about Shincal in 1586 (sic): I heard Captain Blas Ponze say... that Londres was peopled... governors and captains of the Ynga [Inca] of Cuzo, lord of the Piru [Peru] and that they extracted their tribute in gold and silver and sent them to the Ynga, taking them from the mines of this Londres. And that when the Adelantado [Conqueror chartered by the King of Spain] Almagro passed by into the kingdom of Chille [Chile] to conquer it through this Londres, it had five hundred soldiers and more than three thousand service indians..."

In other words, the Inca operated gold mines and had a garrison of 500 men and 3,000 natives here, paying tribute to the Inca Emperor.

The climate is very dry: 171 mm per year of rainfall - 6.7 in. with very low relative humidity. Summer is the rainy season (Nov. to March). Temperature fluctuates greatly between day and night.

Ruta 40 is paved in this section, it is relatively straight and flat.. The shoulders are gravel and there are concrete fords across the dry river beds that cross the road quite frequently :

There are many dry river beds that run across the highway's alignment, draining the Andean foothills that lie to the west. They only carry water during the summer rainy season, and building bridges to cross them would be an expense. Furthermore, the summer flash floods wash mud, branches and rocks down from the mountains which would quickly clog the area beneath the bridges, damming the rivers.

After a downpour, the road is quickly cleared with road grader that moves the mud ⁄ rock slides and opens the highway to traffic.

Don't attempt to drive across a flooded ford, wait for the water level to drop.

There are service stations in Belén, Hualfín, Tinogasta, Fiambalá and San Blas.

Your accommodation in Londres...

In Catamarca and La Rioja

Belén and Londres are in the central part of Catamarca Province 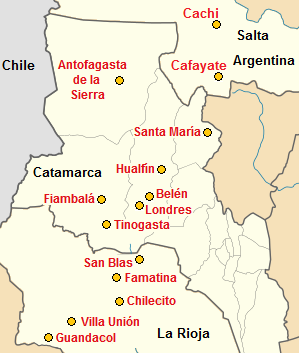