Argentina’s Ruta 40 begins at the Cabo Vírgenes Cape, which is its "zero" milepost, on the Atlantic Ocean a few miles north of the Strait of Magellan. This segment is mostly unpaved (gravel road), and crosses the Patagonian steppe, ending at the city of Río Gallegos, capital of Santa Cruz province.

> > Next Section: From Río Gallegos to Río Turbio

Map of this Section of Ruta 40

The map of the leg between Cabo Vírgenes and Río Gallegos.

The southernmost point of Continental Argentina

To go further south, you have to cross the Strait of Magellan into Tierra del Fuego Island. This Cape and Punt Dungeness headland, are the southernmost part of Argentina's territory on the South American mainland.

Ruta Nacional 40 begins here, in this isolated place at the cape of Cabo Vírgenes, on the eastern tip of the Strait of Magellan.

The cape is only 9 km (5.6 mi) north of Punta Dungeness. The southern point of Argentina's coast along the Atlantic Ocean, and the northeastern opening of the Strait of Magellan.

The cape of cabo Vírgenes is located in Patagonia, in the province of Santa Cruz.

Until 2004, the Ruta 40 had two sections, and both started in the city of Mendoza. One headed north and the other south, the latter ended near Cabo Virgenes, at Punta Loyola Point, on the mouth of the Río Gallegos estuary.

But on November 24 2004, both alignments of Ruta 40 were unified and the zero milepost was moved 124 km (77 mi.) further south to its current location.

Below is a photograph of the "zero kilometer" milepost, this is an "official" Argentine National Highways Directorate marker (the historic lighthouse can be seen behind it):

Argentina's National Highways Directorate informed that they arbitrarily assigned the "km 100" marker to Routa 40 at Punta Loyola, and that the final alignment of the highway from there to Cabo Vírgenes is (quote) "interrupted", in other words, not built.

Nevertheless, in our website we describe the alignments of Ruta 3 and Provincial Ruta 1 as that of Ruta 40, because they are the only possible way to reach Cabo Vírgenes.

To reach Cabo Virgenes you must take the same road in a round-trip journey. Leave the city of Río Gallegos (km 0) along San Martín Ave. heading south (Here Ruta Nacional 3 and Ruta 40 overlap). 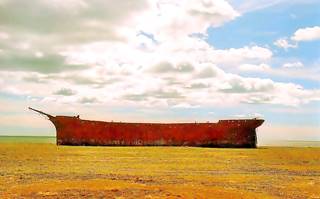 When you reach km 10.3 Ruta 40 turns left towards Punta Loyola which is located on km 40. Este es el Mapa to Punta Loyolas.

You can drive on, around the point and after 6 km (3.7 mi) you will reach the shipwrecked Marjory Glen.

The ship was built in 1892 and caught fire here, in 1911. Two of its crew died in the fire and the rest abandoned the ship, which washed up on the shore (see photo).

Retrace your course to head back to Ruta 3, and at the junction, turn left and go south.

We will use the mileage from Rio Gallegos. Cross the tracks of the narrow gauge Industrial Railroad built to carry coal from the mine at Río Turbio to the port at Punta Loyola.

At km 15,4 a fork to the left that leads to Cabo Vírgenes along Ruta Provincial 1. Take it and leave Ruta Nacional 3, which continues south, towards the Chilean border.

Ruta Provincial 1, a provincial highway, begins with a short paved section, but very soon becomes a gravel surfaced road. It is a wide and relatively smooth road without steep inclines. It has a general NW to SE course.

The road crosses the souther range of the Patagonian steppe, and the shrubs and bushes lie close to the ground to face the strong winds (coirón, calafate, mata verde and mata negra). At km 40,2 after crossing the Chorrillo de los Frailes stream, to your left is the ranch Estancia de los Frailes. At km 70 the road turns east and runs parallel to the Chilean border.

Here, to your right is another ranch, Estancia Condor and ahead, at km 85 is a gas treatment plant from the rich gas and oilfields of the Magellan region.

Keep driving and at km 113 on the south side of the highway is the Estancia Monte Dinero, a working sheep ranch which also offers accommodation to guests at the ranch house, built in 1880 and which overlooks the Magellan Strait:

At km 123 to your right, is another processing plant, "Bateria Recepción Magallanes", belonging to the JV of Argentina's YPF and Chile's ENAP. The underground pipelines from the oil and gas wells in the South Atlantic merge here for treatment.

Just ahead, at 125 km Ruta 1 forks to the south, heading to Punta Dungeness. Take the left fork, and just 1 mile ahead (km 127) you will reach the historical Punta Vírgenes Lighthouse and the Kilometer zero of the Ruta 40.

> > Map of Section 1 from Río Gallegos to Cabo Vírgenes.

A "Cape" is a headland extending into the sea. Cabo Virgenes was discovered by Magellan on October 21, 1520 during his expedition which was the first to sail around the world. His chronicler, Antonio Pigafetta wrote in his diary: "On the day of the eleven thousand virgins we entered a strait, the cape of which we named the Cape of the Eleven thousand virgins".

He was referring to Saint Úrsula who was martirized together with her companion, Undecimilia, in Cologne, Germany by Attila the Hun. They had refused to surrender their virginity. "Undecimilia" which was later taken to mean "eleven thousand" in Latin...hence the "eleven thousand" virgins. Nowadays the cape's name in Spanish means "Virgins' Cape".

The Lighthouse at Cabo Vírgenes 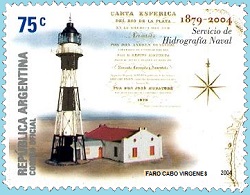 The historical building was erected in 1904. It is a steel tube which contains a ladder. It is supported by a lattice of steel pipes.

The image shows an Argentine mail stamp issued in 2004, depicting the lighthouse.

Visi the Museum of the Universidad Nacional de la Patagonia Austral, that is next to the lighthouse.

The sign marking the "Km Zero" is shown below. The length of Ruta 40 is incorrect, it is longer than 5,080 km:

Drive south for 9 km (5.6 miles) along the gravel surfaced Ruta Provincial 1, and you will reach the northeastern mouth of the Strait of Magellan. This is Punta Dungeness, named so by British naval officer Samuel Wallis in 1766, after its namesake in Kent, England.

On the Chilean side of the point is the Punta Dungeness lighthouse built in 1899 and the first marker of the Argentine-Chilean border, "hito 1", to the south, barely visible is the Island of Tierra del Fuego.

The first settlement in Patagonia

Sarmiento de Gamboa founded the first "town" in Patagonia in 1584, and named it "Nombre de Jesus" (Name of Jesus). Its remains have been found next to the cliff close to the Cabo Virgenes lighthouse.

The site is known as the Valle de las Fuentes and a monument marks the place.

The lack of food drove its inhabitants to move out shortly after it was founded. They went to the village of "Rey Don Felipe" close to the location of modern Punta Arenas (Chile). The residents of both cities starved to death and only one man survived, to be rescued by Drake a few years later.

Open seasonally, daily, from 8 AM to 8 PM. Admission fee charged.

It was established in 1986 as the Wildlife Reserve of Cabo Vírgenes to protect not only the penguins but also the historical sites at the cape.

It is an ideal place for watching the penguins: during summer, the colony has over 150,000 breeding couples of Magellanic Penguin (Spheniscus magellanicus), who choose this spot to court and lay their. It is the Second Largest Penguin Colony in South America.

The weather is cold with a mean annual temperature of 6 °C. (almost 43°F), closeness to the sea makes it more moderate than further inland. Technically it is a cold oceanic semi-arid climate with scarce rainfall (approx. 260 mm or 10.5 inches yearly) which fall regularly year round.

Visit Cabo Virgenes between November and April, it is the warmest time of the year.

Very Important: bear in mind that there are no towns or fuel along this section of Route 40. You must fill up your gas tank in Río Gallegos before leaving. Take adequate gear with you.

Ruta 40 crosses the steppe here, the distances are great and there is no fuel along the way. It can get very cold here in winter. Winds are strong, drive carefully and be aware of sudden gusts

Snow is not all that frequent but it can snow a lot and it freezes during winter, with frost.

Most of the road is gravel surfaced be on the look out for stray stones -if you rent a car, buy window breakage insurance.

Gravel Road. Drive carefully on the gravel roads, you can skid and breaking distance increases.

There is fuel in Río Gallegos

Find your hotel in the area close to Cabo Vírgenes...