Ruta 40 in the South of Patagonia

This leg of Ruta 40 has only one gravel section, the rest of the segment is paved.
The highway crosses the Patagonian steppe following the valley of the río Gallegos River from its estuary on the Argentine Sea of the Atlantic Ocean to its sources in the low mountains at the foothills of the Andes, where you will see the first trees of the Patagonian forest.
It links the city of Río Gallegos [see our Spanish language webpage], which is the capital of Santa Cruz province, with the mining town of Río Turbio. [see our Spanish language webpage]

Ruta 40: From the Sea to the Andes

Map of this Segment 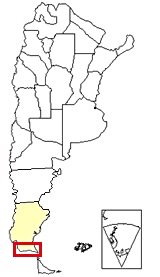 Section 2 is located in the southern part of Argentina, see red box at the bottom of this map

See this Google Map of the section.

This is another map, in image format: Map of this road section: Río Gallegos a Río Turbio

Other maps of the region and Santa Cruz Province

Description of the itinerary: Section 2

Argentina's Ruta Nacional 40 runs along the southern bank of the río Gallegos River from the city of Río Gallegos, on the river's estuary, heading west to its sources, near the town of Río Turbio.

This section is 266 km (165 miles) long, which is almost fully paved: there is a section with a lenght of 48 km which is unpaved; it is gravel and dirt roadbed.

Gravel and Paved sections of Ruta 40

Learn all about which parts of Ruta 40 are not yet paved:

Important. Fill up your gasoline tank before leaving because there are no service stations along the way until you reach the town of 28 de Noviembre (which is 252 km away).

Drive south from the downtown area of Río Gallegos, which is our km 0 for this section, taking Av. San Martín. Then when you reach Av. Benigno Carro, (which is the superposition of Rutas Nacionales 40 and 3) turn right, towards the west.

Learn all about > > Río Gallegos [see our Spanish language webpage]

Here Ruta 40 is a four lane divided highway. You will drive past the airport (km 6), "estancia" (Estancia is Spanish for Ranch, and in Patagonia it means a sheep farm) Killik Aike (km 19). At km 26 Provincial Highway Patrol Police post and roundabout. Turn left and head west leaving the freeway behind.

The Ruta Nacional 3 (Argentina's National highway #3) that you have just left, continues northwards crossing the Gallegos River heading towards Güer Aike and eventually reaches the city of Buenos Aires. From Güer Aike the provincial highway "Ruta Provincial" (RP) 5 which is paved, offeres a shorter drive than Ruta 40 to reach El Calafate, El Chaltén and the "Los Glaciares National Park".

Head west along Ruta 40. The highway runs close to the río Gallegos River. At km 39 the road meets (from the left) the railroad tracks of the old narrwow gauge "Ferrocarril Industrial" (Industrial Railroad) , at the station known as Apeadero Luís Piedrabuena.

Ahead is the entrance to the Touristic "estancia" Palermo Aike. Ruta 40 runs more or less parallel to the Gallegos River and the railroad (to your left, on the south side).

This railroad, whose Spanish name is "Ramal Ferro-Industrial de Río Turbio" (RFIRT) is after the Ushuaia tourist railway, the southernmost railroad in the world.

It was built to transport the coal from the Rio Turbio mines to the port at Punta Loyola.

At km 61 the highway has a grade crossing with the railroad, which passes to the northern side of Ruta 40. At km 68 to you right is a dirt road that heads towards Capitan Eyroa station and Estancia Las Buitreras.

This is the access to the Las Buitreras archeological site which has rock art. It is located on the northern shore of the Gallegos river, which you can cross on a pedestrian suspension bridge. The estancia es a fishing lodge, ideal for fly fishermen after Patagonia's sea run brown trout.

Patagonia south of the Santa Cruz River is not as dry as it is north of that river. The valley of the Gallegos River is therefore less arid. It has pasture and not only shrubs. It rains more in southern Santa Cruz province.

The highway approacehs the río Gallegos again at km 100 and just ahead (km 104) to your right is the hotel Bella Vista.

The name means "Beautiful View", and it used to be the main establishment of Bella Vista "estancia", a large sheep farm.

Ruta 40 crosses the Gallegos Chico river (Small Gallegos) which is also a good fishing spot. At Bella Vista there is a place to eat at, lodging, camping and a tire repair shop.

The following image shows the newly paved Ruta 40, the old steel railroad bridge and the narrow bridged of the old Ruta 40.

The highway moves away from the river with a NE - SW course towards the border between Argentina and Chile, which here runs along the 52° South parallel.

Ruta 40 almost touches the border when it reaches El Zurdo at km 155. Here it crosses the El Zurdo creek (the word means "The Left handed person"), and goes by the Border Patrol squad (Gendarmería Nacional ). There is a pass into Chile, but it is closed. The border is ony 450 meters (1,475 feet) south of the bridge.

The highway turns towards the Northwest and at km 186 at Puente Blanco (White Bridge in Spanish), crosses the río Gallegos River.

End of the paved road. A segment 48 km long of natural surface -gravel & dirt- begins here and continues until the hamlet of Turbio Viejo

You will now begin to see the Patagonian Andean forest: small clumps of trees, mostly Nothofagus antarctica, a species of Southern Beech, grow near the river. There is a very basic place to eat at by the bridge.

The unpaved road passes by estancia Glencross where it crosses the río Turbio (the Spanish word "Turbio" mans murky, turbid), it is a tributary of the Gallegos river. Ruta 40 continues with a NW course towards the Andes.

The highway passes by the entrance to the touristic estancia Stag River (km 227) which has accommodation.

At km 234 is the old semi-abandoned village of El Turbio which was the original mining settlement in the area. Grocery store, and bar - simple diner.

Ruta 40 crosses a rolling countryside, with hills. Creeks and streams cross its path, running east from the damp ranges along the west. There is more greenery and the trees become thicker. There are ñire, lenga (another variety of Southern Beech) and ferns.

At km 240 is the Military Base of Rospentek Aike. From here you can cross the border and visit Chile using the International Border Crossing of "Laurita- Casa Vieja" via Ruta Nacional N° 293 "Antártida Argentina" and the Chilean Highways Y-235 and National N° 9. You will reach the Chilean city of Puerto Natales (pop. 25,000)

Side trip to Chile

It is roughly 28 km from Rospentek Aike crossing to Puerto Natales (See map with directions).

The Mylodon Cave is located 26 km north of the city, just half-an-hour drive away (Map with directions).

Here, in the 1890s they discovered the fur and dung of a gigantic prehistoric ground sloth (a Mylodon) it seemed so fresh that many believed it was still alive and lived in the Patagonian forests. Modern techniques dated these remains to the end of the Last Ice Age, almost 10,000 years ago.

Monsters of Patagonia by Austin Whittall, is the ultimate guide to Patagonia's mysterious breings (mythical and real, like the Mylodon).

Now we will continue the final part of our journey, in Argentina, along Ruta 40:

Ahead is the small village of Julia Dufour (Campamento Dorotea) with lodging at km 258.

End of this segment

Here is the 240 megawatt power plant which was built to burn the coal from Río Turbio mine during the Kirchner Administrations (2003 - 2015); it is a white elephant that costs hundreds of millions of dollars, paybacks to corrupt government officials and to date it lies idle, never having generated a single watt of electric power.

The road forks and to the left it heads into the town of Río Turbio, Ruta 40 heads north towards El Calafate [see our Spanish language webpage]) which we describe in the next leg of Ruta 40: Rio Turbio to Tres Lagos.

Turn left and at km 266 you will reach the town of Rio Turbio, it has all the services that a tourist may need: fuel, shops, logding.

From Río Turbio you can also cross the border and visit Puerto Natales in Chile, which is 30 km away (map with directions).

The weather is quite cold; the mean annual temperature is only 6 °C. (roughly 43°F). The coastal areas have a slightly warmer climate.

Although it is less arid than the rest of Patagonia, it is a semi-arid area with little rain (only 260 mm fall each year -10.5 inches).

It rains throughout the year, and it rains more in the western part, in the Andean foothills at Río Turbio.

Summers are cool and winters cold. Expect frost, ice and snow in winter. The lowest temperature recorded in this area was -20,2°C (-4°F). The highest summer temperature was a sweltering 35°C; (95°F).

The relative humidity is low (60%) meaning that it is quite dry.

Drive this segment of Ruta 40 during the warm season: between November and April. You will avoid the snow and ice of winter; by the way, winter is the low season with cheaper accommodation opportunities!

Very Important: Fill up your gas tank in Río Gallegos before leaving. Take adequate clothes and gear with you.

Ruta 40 crosses the steppe and the distances are great and there is no fuel along the way until you reach 28 de Noviembre. Wind and cold climate can cause hypothermia.

Wind is strong, drive carefully and be aware of sudden gusts

Snow is not all that frequent but it can snow a lot and block the highways in June and July. It freezes during winter, with frost.

On the gravel surfaced segment be on the look out for stray stones -if you rent a car, buy window breakage insurance.

Gravel Road. Drive carefully on the gravel roads, you can skid or flip over. Breaking distance increases.

Find hotels in other towns in southern Patagonia 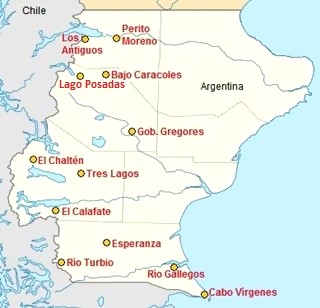