Ruta 40 in the Lake District

This section of Ruta 40 runs through the forests of the Patagonian Lake District along one of Ruta 40’s "Top 10 Attractions", the Ruta de los Siete Lagos (7 Lakes Road).

It crosses the Lanín and Nahuel Huapi National Parks, coasts crystal clear lakes in the Andes Mountain Range and finally reaches the Patagonides Mountains in the steppe of central Neuquén province.

This is a completely paved segment and gives access to the Land of the Araucarias (Monkey Puzzle trees) in Aluminé and Villa Pehuenia.

A Summary of this Road Section

Heights along the road 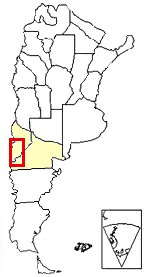 Section 7 is located in Southern Argentina, see red box in this map

Maximum elevation of the section

To bear in mind

The highway is a 2 lane road. From Bariloche to the turnoff at Lago Espejo lake, north of Villa La Angostura there is heavy traffic of Chilean Trucks that use Argentina's paved Ruta 40 to reach southern Chile and avoid slow ferry trips across the broken Chilean coast.

The road is mostly a winding mountain road, which in winter the road can be closed due to heavy snowfall for a couple of days.

Towns and villages along the route

Map for this Section of Route 40

See this Google map of the section.

Other maps of this leg:

We describe this leg of Ruta 40 from South to North, starting at downtown Bariloche, (km 0).

Full details on the town of > > Bariloche [our Spanish language webpage]

Panoramic view to the west from Dina Huapi: Bariloche with the Andes in the background:

Detailed itinerary in English of the Ruta 40 from Bariloche to San Martín de los Andes:

So we will continue north of San Martin de los Andes, where the "Seven Lakes Road" ends:

Leave the city northwards along Ruta 40 and at km 193 to your left is Ruta Provincial 48 (gravel) which runs west, along the north shore of Lake Lacar, to the Chilean Border crossing at Hua-Hum.

Ahead, also on your left is Ruta Provincial 62 (gravel) which runs north towards lake Lolog.

At km 214 to your left, in the flat bottom of the Vega de Maipu valley is San Martin de los Andes' airport, the highway has crossed the continental divide (north of this point the watershed drains into the Atlantic Ocean).

The highway has left the forests, and now runs along a flat wide valley with pastures and meadows. At km 221 roundabout where Ruta Provincial 49 forks off to the right, a dirt road heading to Alicura on the Limay River. Continue northwards.

At km 229 to your left is the highway that heads west, into the forests and lakes Currhue Chico and Currhue Grande, and a border crossing into Chile.

Ruta 40 becomes a boulevard as it runs through this town, reaching its small central district at km 233. The town has gasoline, lodging, stores and covers the needs of tourists and visitors.

Full details on the town of > > Junín de los Andes

Leave Junín de los Andes along Ruta 40 northwards. At km 237 just before crossing the Chimehuin River, to your left is the gravel surfaced Ruta Provincial 61 that heads west into the Lanín National Park and Lakes Huechulafquen and Paimún.

We describe the side trip to the Lanin volcano in our Junín de los Andes webpage.

Continue straight, cross the bridge. Ahead is the junction with Ruta Provincial 23 which is paved (km 238) turn right towards the east.

Side Trip to the Land of the Araucarias

If you continued north along RP 23, you can visit the town of Aluminé, and the lakes of northern Lanin National Park, here is the land of the gigantic Patagonian monkey puzzle tree, the Araucaria.

Back to Ruta 40: The highway runs eastwards into a region which is drier than the one you are leaving behind. It is a winding road among hills covered with the typical steppe vegetation: low-lying bushes. There is a spot to watch the Andean Condor not far ahead.

To the south, along Ruta Nacional 234 you can reach the Ruta Nacional 237 (both are paved) and head towards Bariloche via the Valle Encantado (Enchanted Valley) of the Limay River.

The native Mapuche people believed that a man-eating ogre lived on the shores of the Collón Curá River, it was named the "Trauko".

It had a long beard and its fire-red colored hair resembled bullrush stalks. He was killed by the dogs of a young native maiden and his head became a mask of stone, which named the river (in Mapuche language: "collón" = mask and "curá" = stone).

The myth probably originated in the dinosaur fossils which are quite abundant in this area.

The bridge (designated as a Historic Site) is a narrow one-lane bridge. A new one has been planned, to replace it, but work on it has stopped.

At this point, the Ruta 40 climbs out of the Collón Curá River valley, and runs along the "meseta" or highlands and the slopes of the Sierras Patagónides mountain range:

These "sierras" (mountain range) are a mountain range which runs parallel to the main Andes Cordillera, but roughly 100 km furhter east.

They predate the Andes as they were formed during the Mesozoic Period, and were eroded to their current elevation of some 1.800 meters (5,900 ft), they are low, rounded hills.

There are no towns or villages along this leg of Ruta 40, only some "estancias" (which are sheep or cattle ranches) such as Estancia de San Ignacio at km 273.

Native American Ceferino Namuncurá was born in Chimpay, Rio Negro in 1886 en Chimpay and died in Italy in 1905. He was beatified by the Catholic Church in 2007 (a step before becoming a saint).

His remains returned to Argentina in 1924 and were moved to San Ignacio in 2009 where the Namuncurá Mapuche Community was resettled after they were stripped of their land in Chimpay.

At km 304 is the fertile spot known as Catan Lil (Mapuche for "Cliffs with holes"). At km 308 junction on the left with Ruta Provincial 24 that heads towards Rahue and also Ceferino Namuncurá's grave.

If you drove along Ruta Provincial 24 -gravel- you'd reach a pictouresque zig-zag section of road known as the Cuesta de Rahue [our Spanish language webpage], with a great view of the Andes and the Alumine River Valley. The road also leads to the town of Alumine.

Full details on the town of > > Aluminé

Rahue in Mapuche language means "to be full of water" in relation to the Alumine River.

North along the Patagónides Range

Ruta 40 heads north through a very arid area in the Patagónides hills. At km 345 junction to your left with Ruta Provincial 56 and at km 361 comes Ruta Provincial 47, which to the east heads towards the town of Piedra del Águila, both roads are unpaved.

At km 392 bridge across the Picún Leufú, whose waters flow into the Limay River and eventually reach the Atlantic Ocean. Its name in Mapuche language is: "Picún" = north and "Leufú" = River: "northern river", on the northern limits of the Mapuche people's land.

At km 415 Ruta 40 climbs up onto a basaltic plateau, crosses it and descends on its northern side into the Santo Domingo river, to your left. At km 425 junction with the paved highway (Ruta Provioncial 46) that heads west into the Parque Nacional Laguna Blanca National Park (32 km away), a bird sanctuary:

It was established in 1940 to protect the wetland around Laguna Blanca (Spanish: "white lagoon"). It is is a wetland of international importance under the Ramsar convention and is home to several aquatic birds including the black-necked swan (Cygnus melanocoryphus).

The plateau has a relatively flat surface and was formed during the Tertairy Period (2.3 to 8.6 Million years ago), when lava flowed out of cracks on the ground's surface.

Enter the town along Av. Junín de los Andes. At the roundabout it meets Ruta Nacional 22 which heads east to the capital of the province, the city of Neuquén and the Upper Rio Negro Valley. To the west, Ruta 22 overlaps Ruta 40 all the way to the town of Las Lajas [our Spanish language webpage] and continues all the way to the Chilean Border at Pino Hachado pass.

Ruta Provincial 13 also leaves the roundabout, westbound, and reaches the land of the Araucarias, taking you to Aluminé and Villa Pehuenia [our Spanish language webpage] and the lake district in that area.

Full details on the town of > > Zapala [our Spanish language webpage]

Tips for this road section

In the Andean forest region, the climate is wet and cold, with rain falling throughout the year, its average summer temperature is around 15°C (59°F) yet highs can reach 35°C (95°C). The steppe is arid and hot in summer with means above 30°C (86 °F) and the forests are also drier during that time of the year, with an increased risk of forest fires.

The steppe has a wider temperature range between night and day, rainfall is scarce some 300 mm per year (12 inches).

Expect snow in the winter in the Andean region (and during storms, it can also snow heavily both in the forest and in the steppe). Winters are cold with an average temperature of 1,5°C (35°F).

The region is, like most of Patagonia, windy, with strong and persistant westerly winds.

2. When to visit and drive this section

Although you can drive this segment throughout the year, it is best during late spring, summer and early autumn (Nov to May), which is warmer, sunnier and has longer days. The high season is Dec. through Feb. and also during the July Winter Holidays. Book your hotels in advance during the high season, hotels tend to fill up.

Very Important:the towns are few and located far apart; gas stations are scarce. Drive with both hands on the wheel because there can be strong gusts as you drive along the highway.

It can snow in winter and ice will form in shady spots of the highway.

Secondary highways and shoulders have gravel surface so drive with care.

Fill your gas tank at every service station.

The leg from Bariloche to Lake Espejo has heavy truck traffic. Don't tailgate and only overtake when you have clear visibility.

The road is winding and only has one lane each way, so drive with care and respect the traffic signals.

Don't light any fires. If you must, do so in an area where fires are allowed. Never Leave a Fire Unattended.

Keep water at hand to put it out and attend it until it is fully out.

Be a responsible smoker: ashes and butts can start fires so extinguish your butt completely and take back it with you.

Lodging in this Section of Ruta 40

Find a hotel in Zapala...

Find your hotel in : > > Bariloche

Hotels in this section of Ruta 40

Find your room in the towns close to Ruta 40: 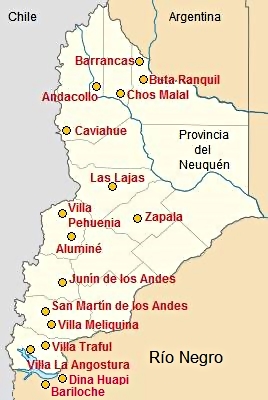